Why are Lomochrome Purple and Cinestill 800T so cool? 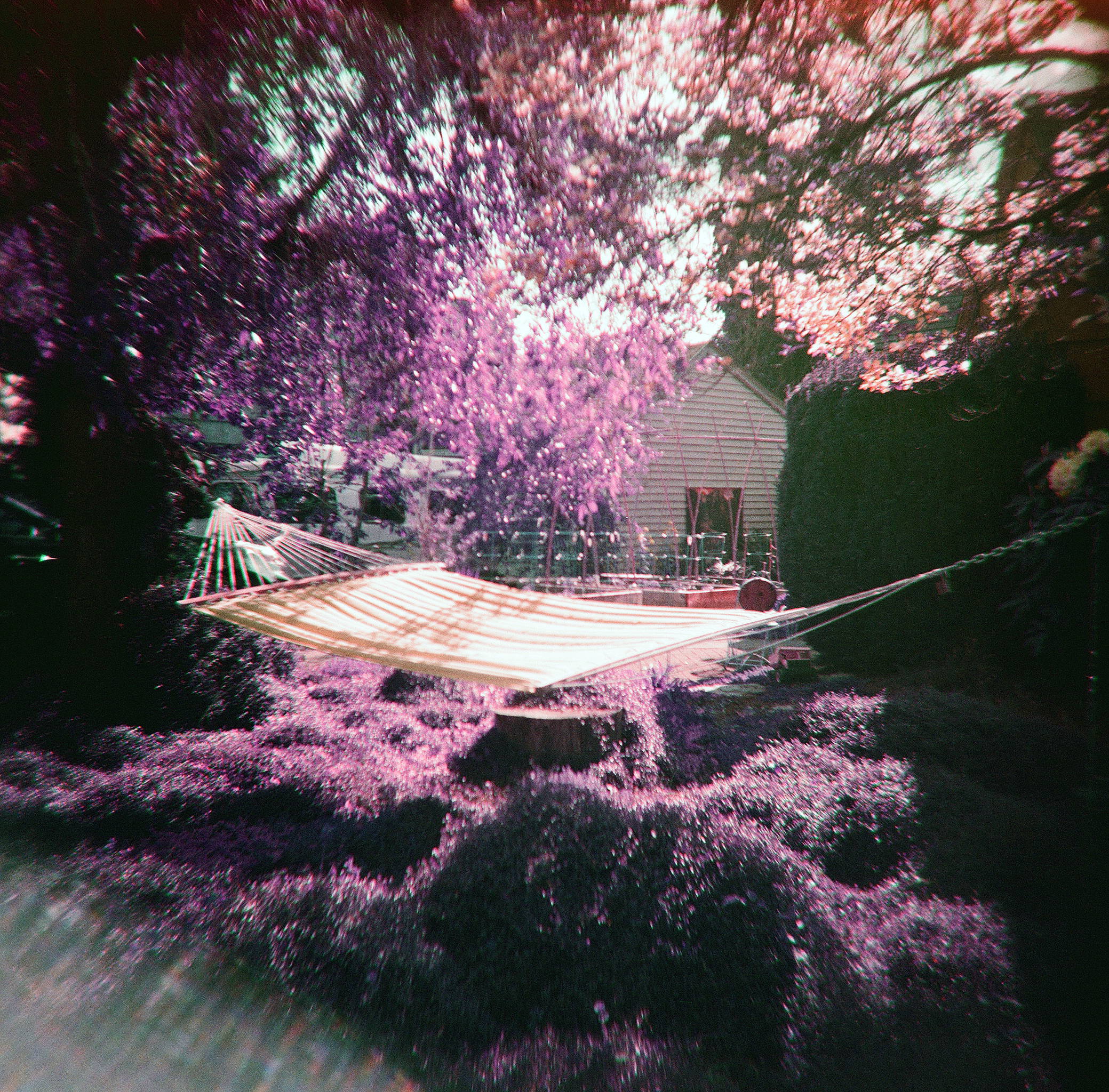 There’s a lot of feelings about the state of film photography in 2022 - Frustration with prices fluctuating, distress over film stocks being discontinued, and agony over scarce availability. Regardless of your feelings on these issues, one thing that we can all agree on is that the increased interest in film photography has brought about the welcomed introduction (and improved availability) of some very unique films.

At Pro Photo Supply, amongst our staff and customers, there seems to be two reigning champions in the unique film stock realm. First is Lomography’s LomoChrome Purple. Second is Cinestill’s 800T. Both of these films have unique formulas that produce a more stylized look and feel that stands apart from more traditional film stocks. Let’s look at what makes these two films so special! 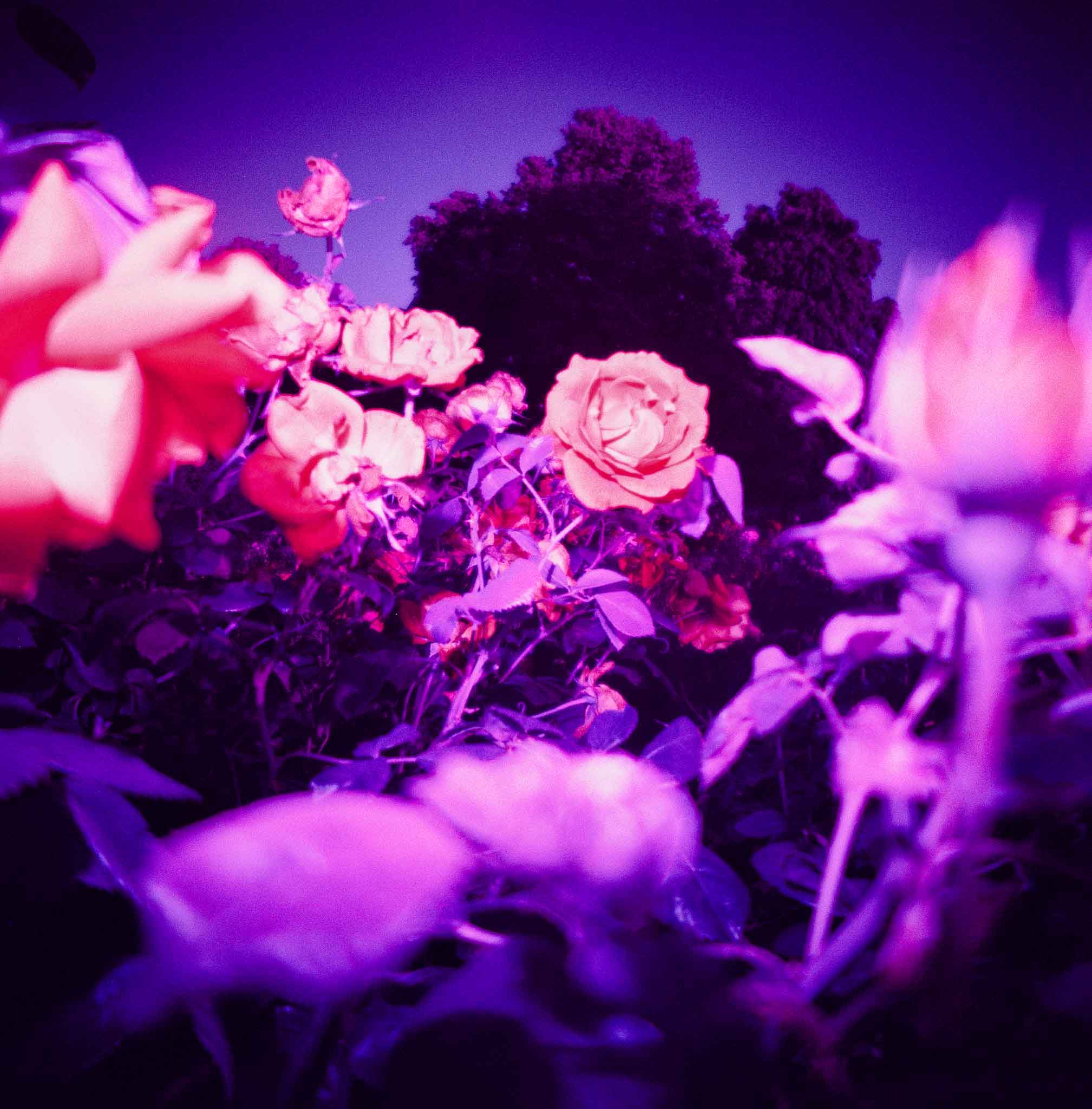 “What is with that photo?!” A common exclamation from someone the first time they see an image created with Lomography’s LomoChrome Purple. LomoChrome Purple is a bit reminiscent of older infrared film but it isn’t a true infrared film. You won’t need a filter to help reign in the spectrum of light being captured and you can process this film using the common C-41 process. Lomography states that it’s the unique chemical formulas they use that help give their LomoChrome films their distinctive look. This fine grain, color negative film, creates psychedelic purple tones with “a heady blend of earthy reds, crisp plums and velvety violet hues” according to Lomography’s own description. 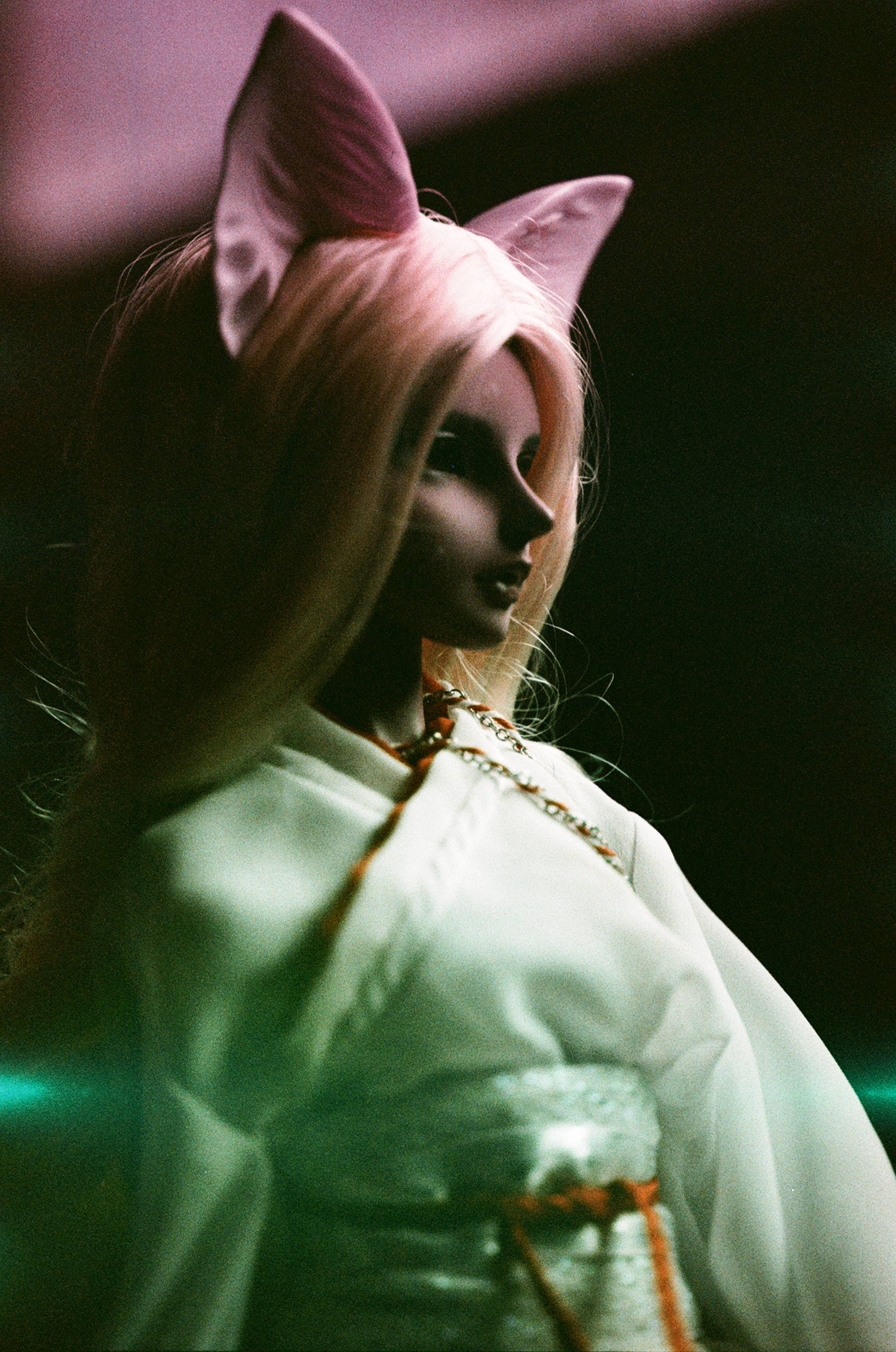 LomoChrome Purple has a green acetate base, which is different from the orange base that your average color negative film has. This orange base is what scanners and digital printers are calibrated for which means a typical film scanner won't recognize LomoChrome Purple’s green base and give your scans a red color cast initially. The best way to remove this red color cast is with some post-scanning color correction to bring forward the color palette that LomoChrome Purple is known for. Looking for a neutral or gray tone that should be present in your image, like cement, and using that to color balance off of is a great way to set the color standard for your scans and remove that native red cast. Once a neutral balance is set, you should see the various shades of blue, red and magenta begin to show within this film.

LomoChrome Purple works at multiple ISO’s, from 100-400, with each ISO rating rendering a slightly different effect. Since you are effectively rating the film as more or less sensitive, the resulting exposure times are changed as you take the shot and therefore so are your images’ tones, highlights, and shadows. You can even switch between different ISO settings on the same roll, since all the magic happens in-camera, and you won’t need to ask your lab for pull/push processing. While you won’t need to ask for special processing, you will want to take into consideration how LomoChrome Purple is scanned and post-processed. 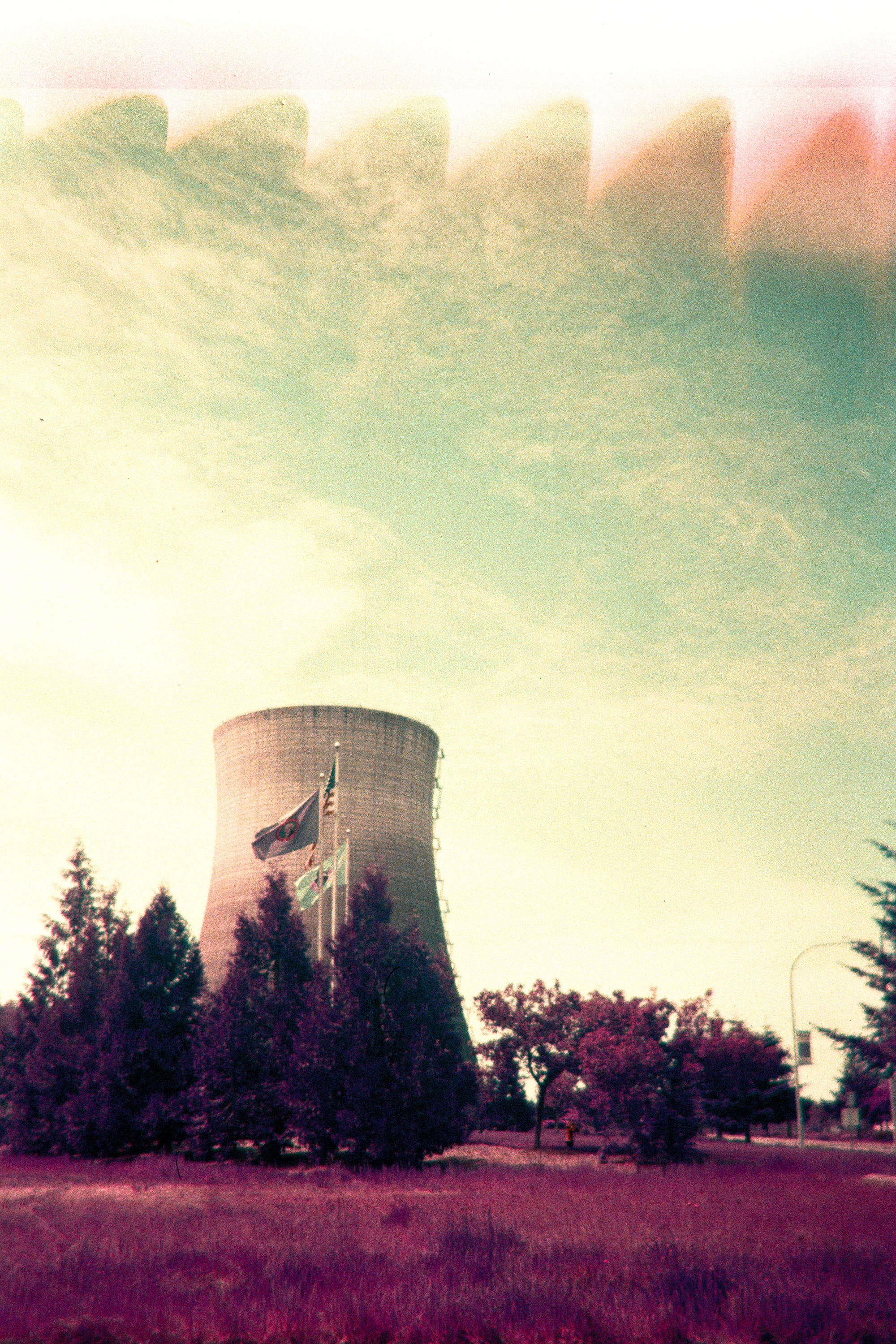 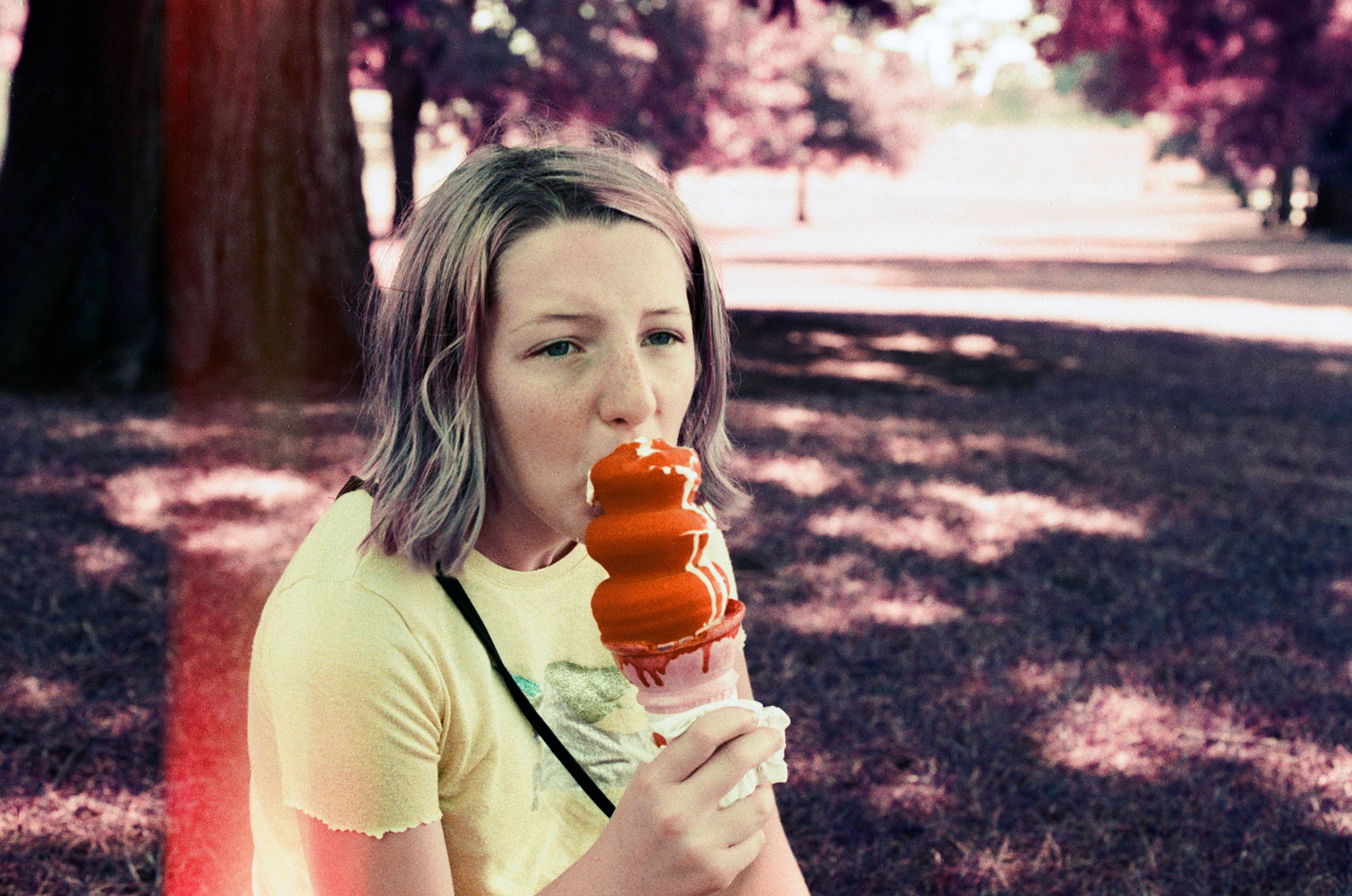 “With special chemical formulas and trippy emulsion concoctions, we have crafted some of the most experimental and extraordinary films on the market today. Forever committed to the continuation and advancement of analogue photography, we are proud to be one of the only companies still developing fresh, new films for contemporary photographers around the world,” states Lomography on their website. And that’s why we love this film. It’s a new film stock, something totally unique to offer our community of film shooters. It allows those photographers who are so inclined to “explore the color spectrum like never before from pastel pinks to mighty magentas and intense indigos…turn this beautiful, bizarre and bewildering world into a wonderland.” 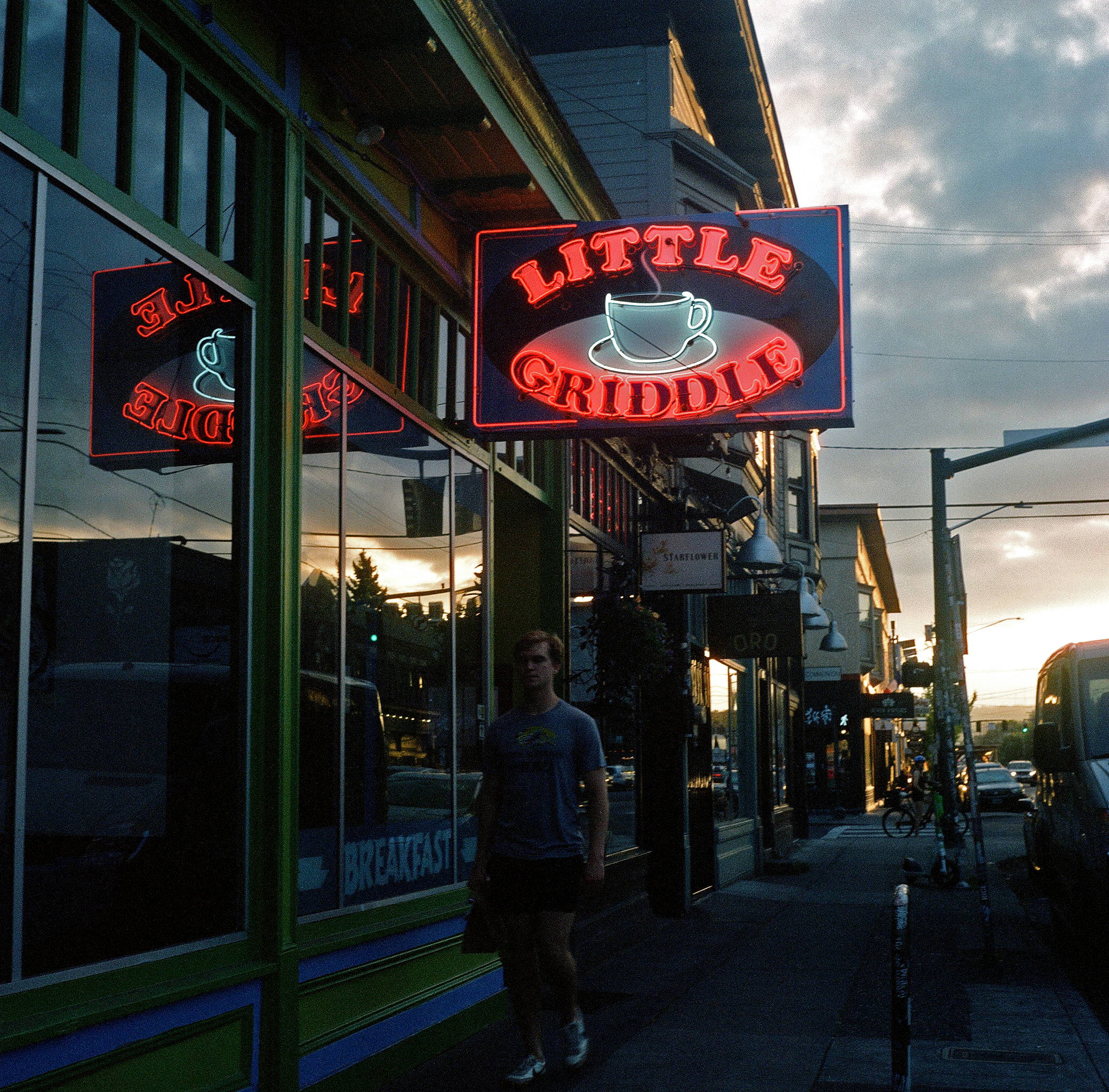 What does that “T” stand for in the Cinestill 800T? Back when motion pictures were still shot entirely on film, they didn’t have the choice of just resetting the white balance in the camera when moving on to a different scene. Their film stocks had to be balanced to the light sources they planned to use for the various scenes. A “T” demarcation typically refers to Tungsten, which in turn most commonly is short hand for lamps using tungsten-halogen light bulbs. These bulbs emit light that covers the full range of the visible light spectrum as well as some temperatures that aren’t visible making tungsten lights great for rendering rich and accurate colors. And though technically tungsten light registers a temperature of 3200K (K is for Kelvin, a unit of measurement for the temperature of light), the term has become somewhat of a catch all for warm light sources in general, often ranging in temperature from 2700 - 3200K. 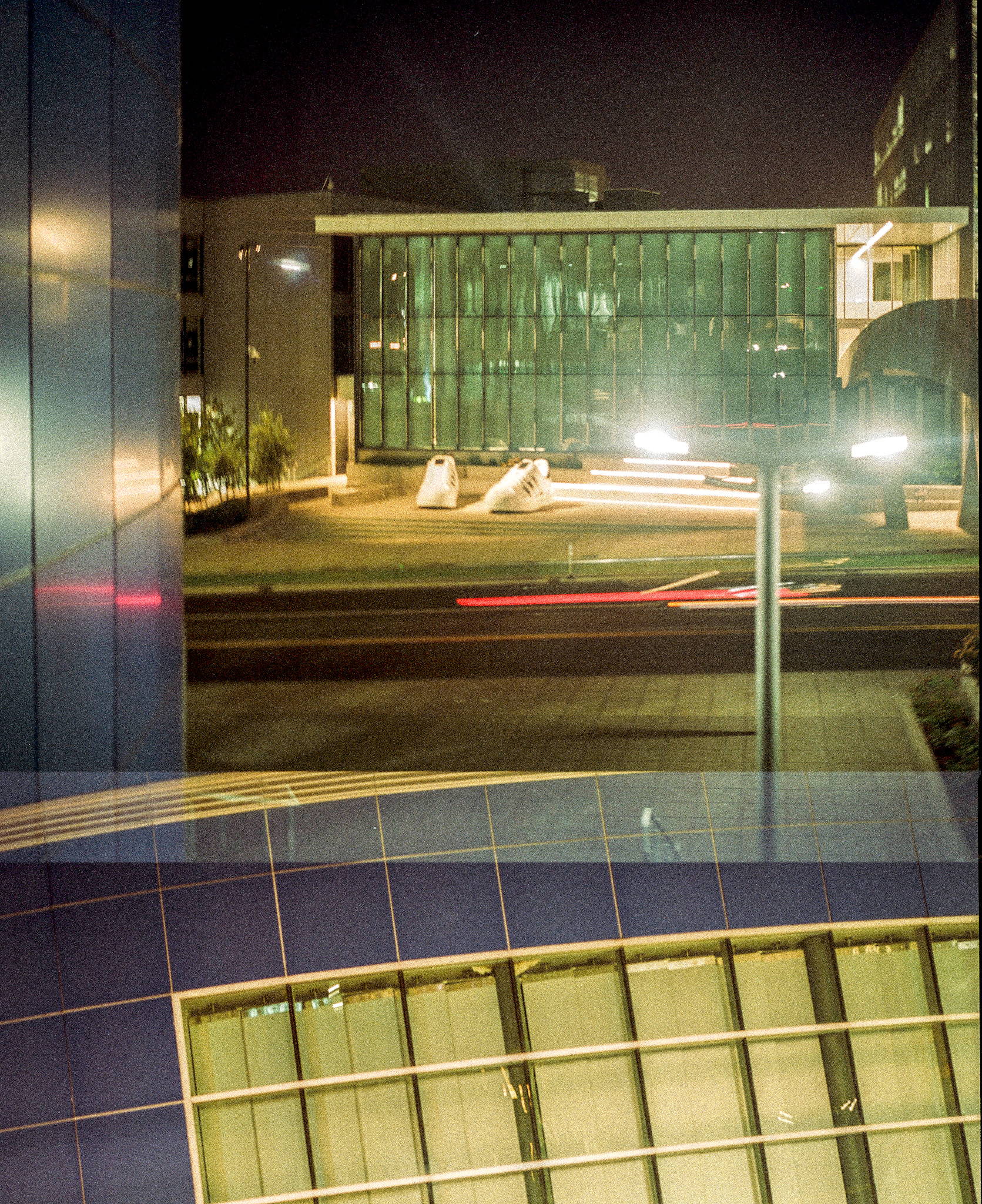 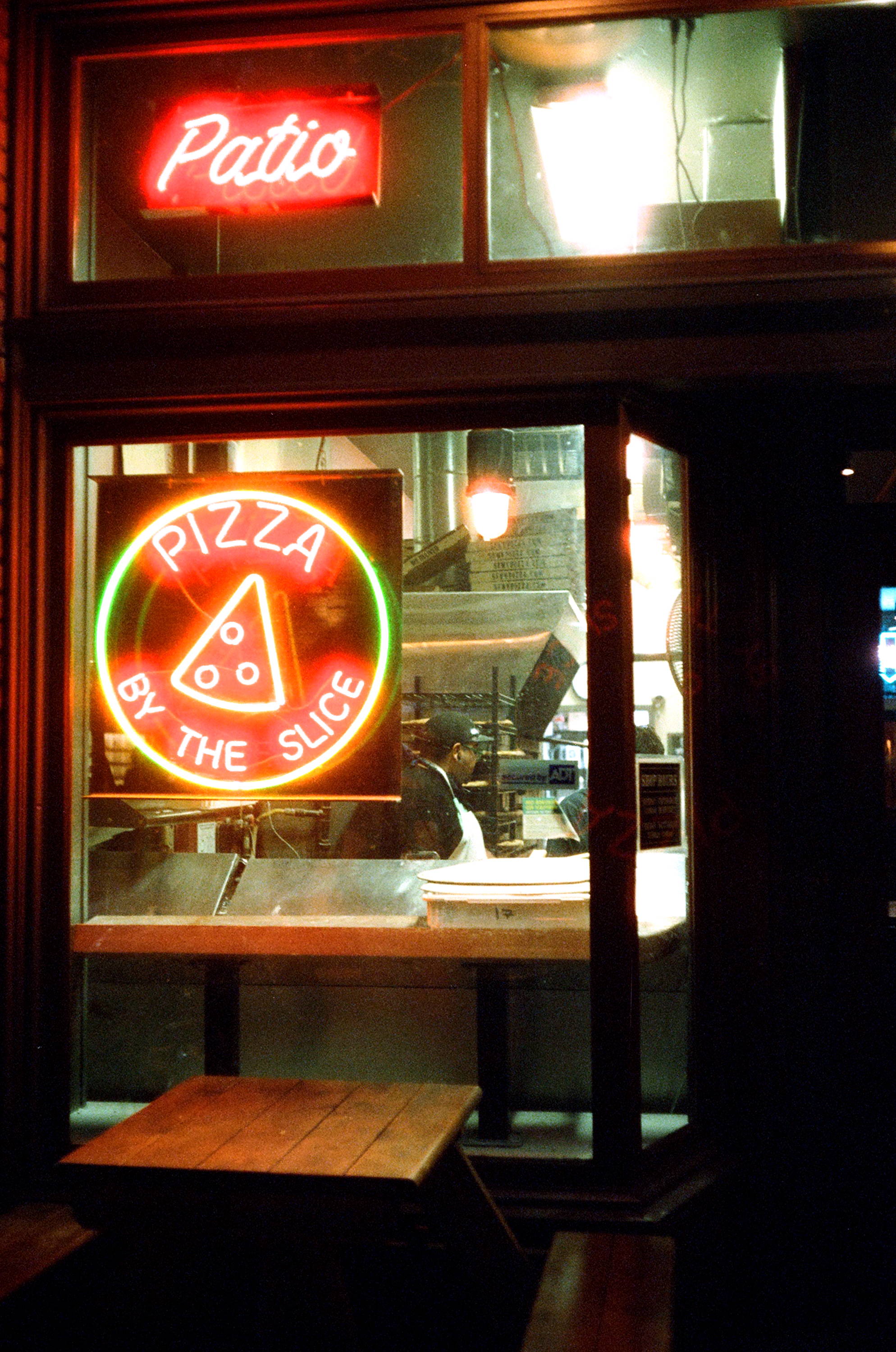 Motion picture production houses liked tungsten bulbs because they can burn for hundreds of hours without losing their color temperature accuracy or diminishing in power, thus making them an excellent light source on set, provided you can handle the heat and power requirements to run them. The range between tungsten and daylight colored light is the most commonly found in film because it mimics what we see in the real world. Tungsten typically marks the warmer end of the color temperature spectrum, while daylight marks the cooler end. 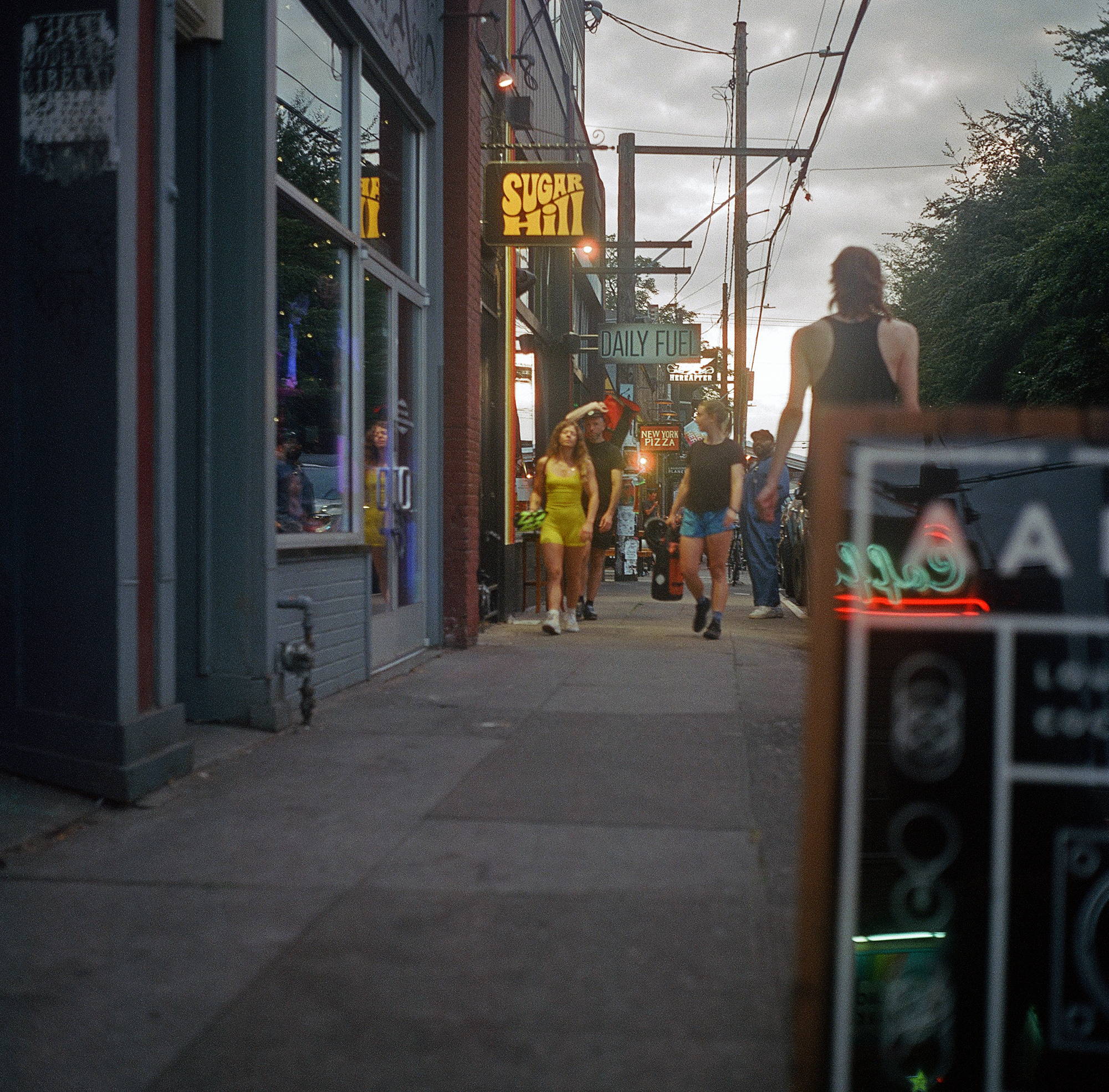 So why does all that matter to fans of Cinestill 800T?

Because as Cinestill puts it on their website, it “is an ISO 800 speed, tungsten balanced, color negative film that is based on the same gold standard motion picture technology used by top cinematographers around the world.” Cinestill is known for giving new life to old motion picture film stocks by adapting them for still photographers to shoot. Typically motion picture films contain a layer called the remjet layer which is a removable jet black layer located on the bottom of motion picture films to offer anti-halation, anti-static, lubrication and scratch protection. Cinestill removes this layer so that their films can be safely processed in standard C-41 photo lab machines, Cs41 processing chemicals at home, or in Cs2 chemistry for low-contrast motion picture negatives. However removing the remjet layer also results in a slight halation effect that many other color negative films formulated strictly for still photography won’t have. This halation effect, along with the fact that this film is designed for difficult low light conditions and can be push-processed up to 3200 ISO, gives images made with it a unique look whether they are tungsten lit or not. 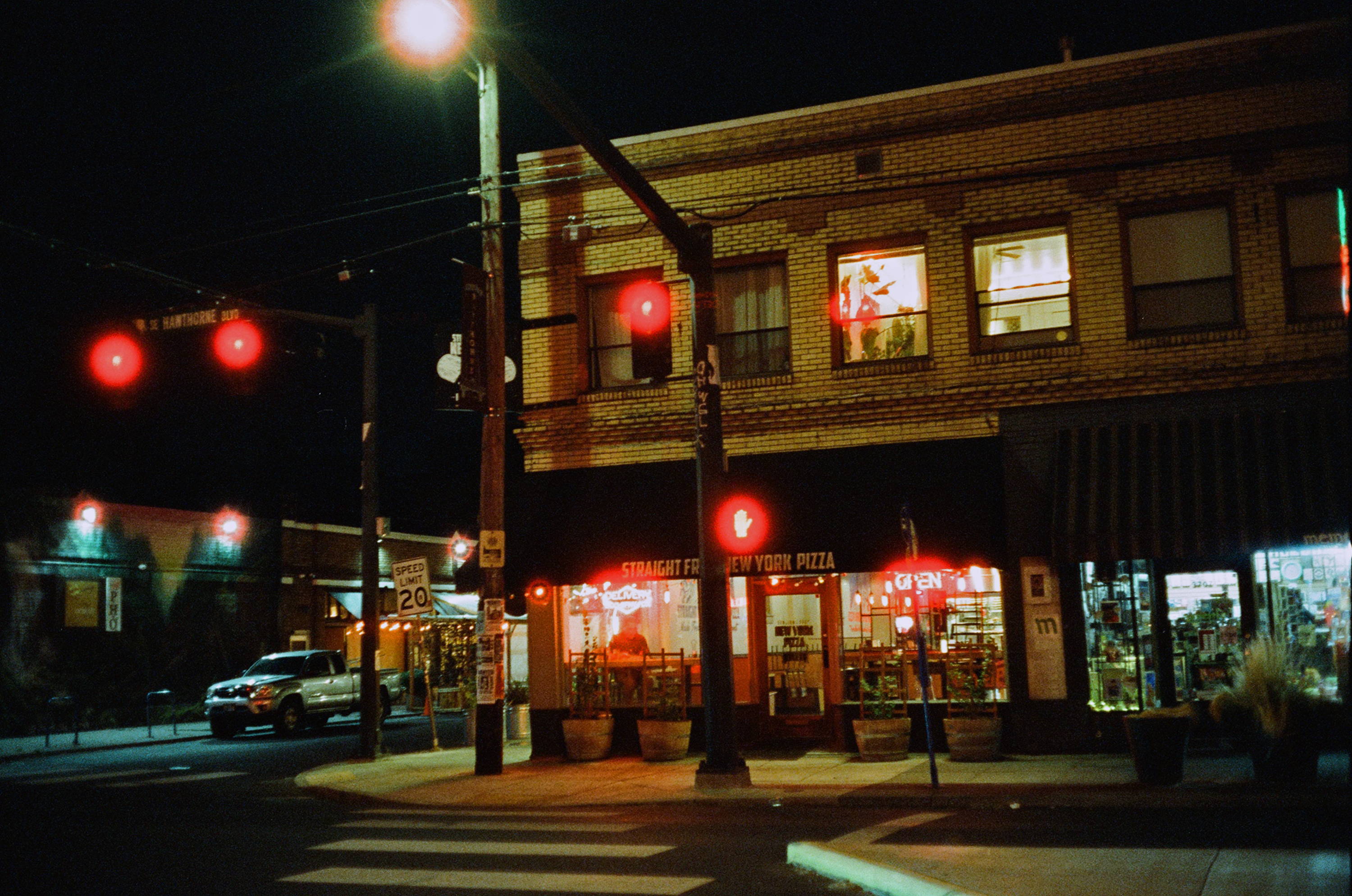 Without the presence of an anti-halation layer, CineStill 800T has a signature look in which a red glow may appear around overexposed light sources, giving that classic film noir movie vibe. This red glow can be decreased with a CineBloom style filter, but its fun presence and unique look tends to be one of the things that draws photographers to using this film stock. 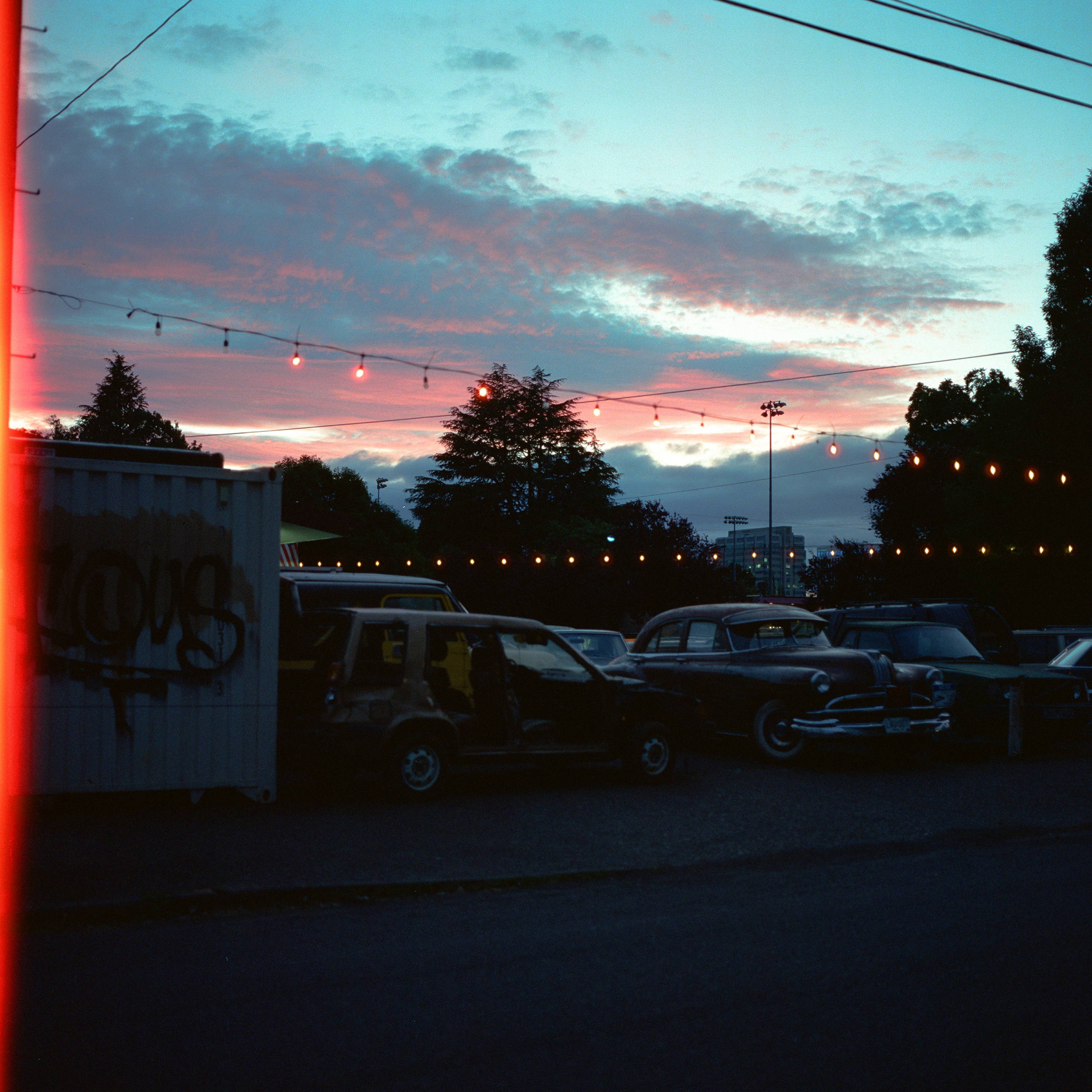 Have you ever tried Lomography's LomoChrome Purple or Cinestill's 800T?

If you haven't, grab a roll and see what you think! And if you have, show us what you shot with it by using #featuredbyprophotosupply on your social media posts with these two films. We can't wait to see the creativity these two unique film stocks have inspired!

Previous article Developing Film at Home
Next article What's the Deal with Portra 400?